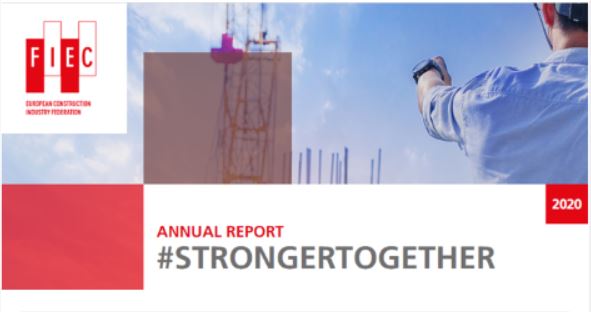 Discover the FIEC Annual Report 2020, which contains the main topics dealt with over the last year.
Quoting our immediate Past President Kjetil Tonning: “It has been a really a challenging period.  2019 saw the establishment of a newly elected European Parliament and new ambitious goals in the EU Green Deal, while 2020 has so far been dominated by the Coronavirus crisis, which has not only changed, but also completely disrupted our lives and our economies. The construction sector has a key role to play in the major recovery process, which will also pave the way towards a sustainable environment for all European citizens.”
FIEC and its Member Federations together with the main stakeholders of the sector are ready to tackle the challenges ahead: #StrongerTogether! 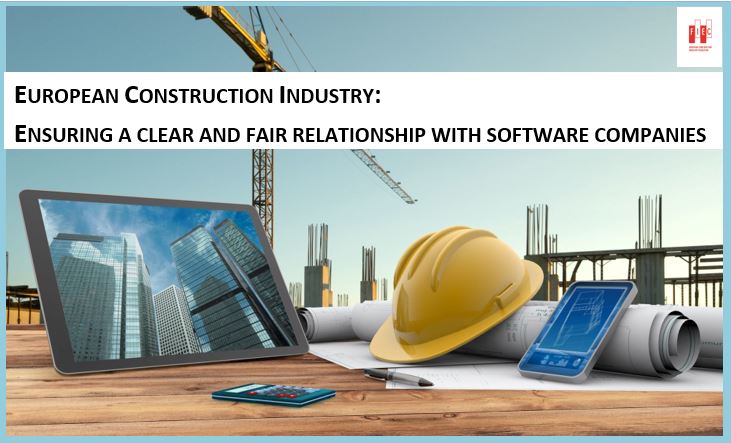 Save the Date – webinar on data and software companies

On Friday 26 June from 15h to 17h FIEC is hosting a webinar: «European Construction Industry: ensuring a clear and fair relationship with software companies».  Vice President with responsibility for the Technical Commission, José-Michaël Chenu, will present FIEC’s position on the subject and then speakers from contractors will share their views.  This will be followed by a reaction from the European Commission and an MEP.  Registration will shortly be launched. In the meantime, you can find our position paper by following the link below. 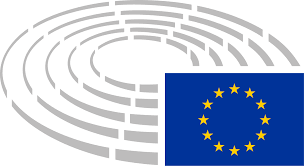 Transport infrastructure in the recovery plan

On 8 June, Henrik Hololei, Director General of DG MOVE in the European Commission, had an exchange with the members of the Transport Committee in the European Parliament on investments in transport under the recently proposed recovery plan. The key instrument for investments in transport infrastructure will be the «Connecting Europe Facility – Transport» with an additional €1.5bn in the new proposal. Members of Parliament rightly stressed that the overall amount of about €23bn (including the allocation from the Cohesion Fund) is insufficient. Expenditure on transport infrastructure in the framework of the Recovery & Resilience Facility will depend on national recovery plans. Similar investments within the InvestEU programme depend on the number of projects applying for financing. Hence, it is not possible to indicate a precise amount that will be dedicated to transport infrastructure.

On 3rd June, the Croatian Presidency of the Council of the EU submitted a series of questions to the Member States, with a view to finding an outcome to the inter-institutional negotiations on the regulation on the coordination of social security systems, which have been blocked since December 2019.

In particular, on the question of prior notification of posting of workers, the Presidency has not managed to reconcile the positions of the national delegations calling for compulsory prior notification, with those who consider that such a provision would impose a disproportionate administrative burden (and therefore call for temporary exemption).

The Presidency consequently proposes a «digital solution» that would make the notification system smoother and might enable recalcitrant national delegations (e.g. Germany and some Eastern European countries) to accept the principle of prior notification. More precisely, the proposal suggests using the “Single Digital Portal” – which provides for validation of the A1 form online by the end of 2022 – to send a prior notification,

On its side, the European Parliament is against any form of temporary exemption from prior notification.

This issue is one of the few crucial ones in view of the resumption of negotiations with the European Parliament, which is calling for work to resume as soon as possible. But most probably, the German Presidency will have to take over this difficult file, from 1st July.